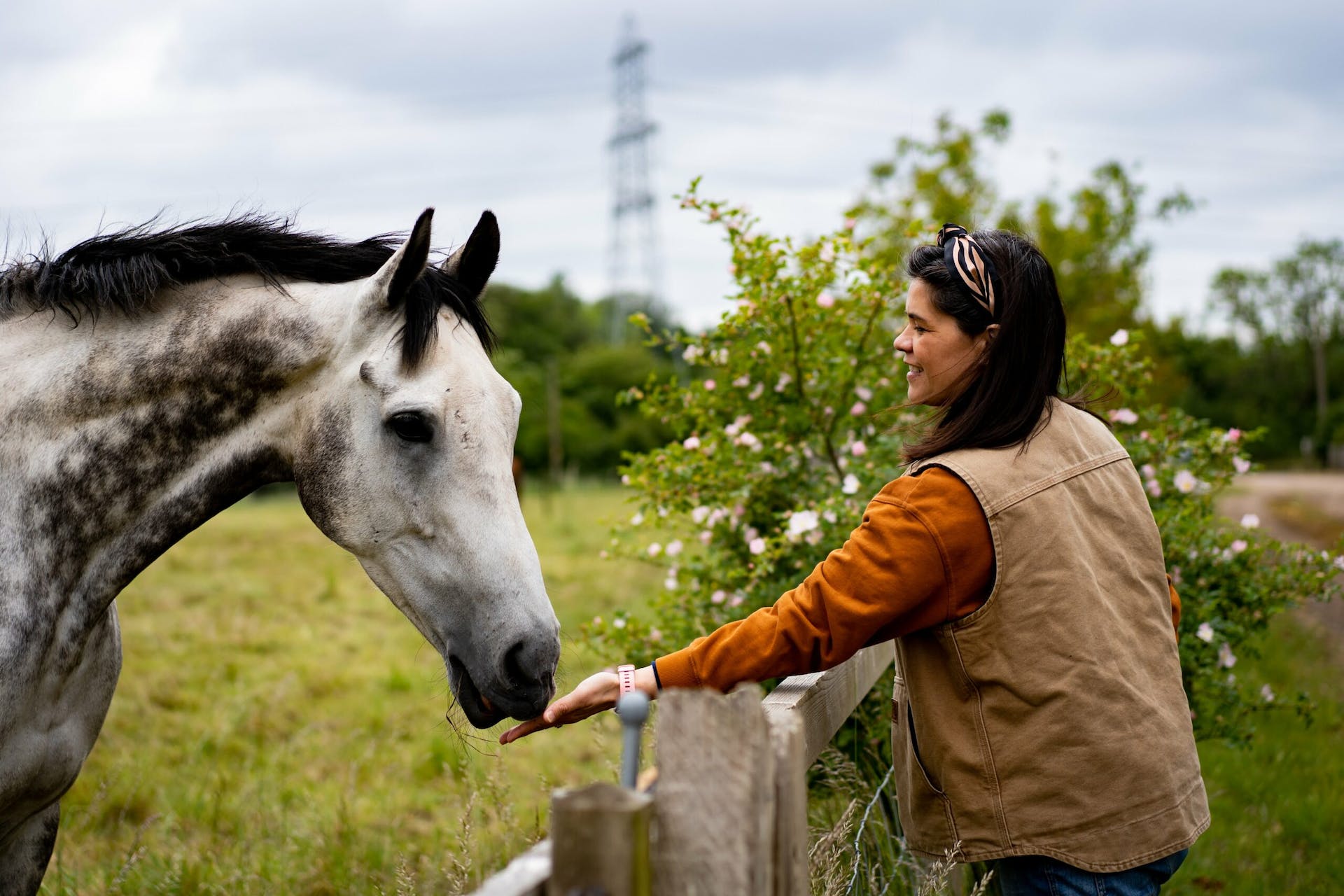 Towards the end of last year, one-half of our founders, Miranda Hudson, sat down with Helen Anne Smith of Burum Collective – a community blog, designed to be an inclusive space where people from wine, beer and ciders can meet.

It opens the discussions of starting a brewery from scratch away from their home and venturing out from city life into the Norfolk countryside. In a thoughtful discussion, Helen proses questions to Miranda regarding how Duration came about, the pandemic, and their plans for the future, with her husband/head brewer & co. founder, Bates.

Being true to Duration’s historical surrounds of an old priory, Miranda speak on the importance and the reason why they chose our site, a 16th century stone barn here in West acre

But if we’re going to be a farmhouse, we need to be where people farm, near some running water, some nice hardwood trees, you know, to get all the good yeast and work with other local producers. So then we found a rundown derelict site, but thought that it would be impossible to do that. 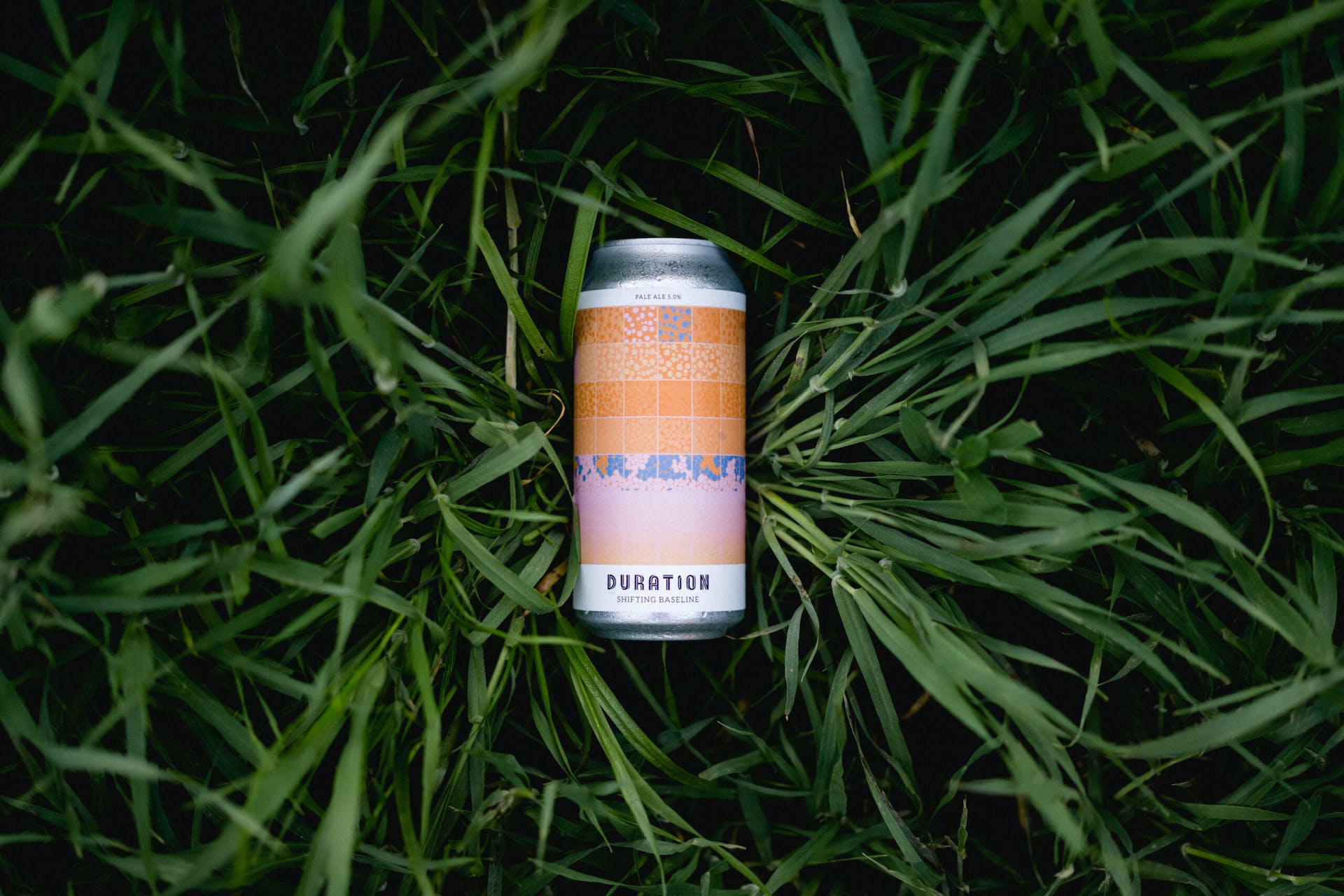 But with a great brewery, comes great responsibility. Starting something new in a small area, particularly in a grade-II listed site, while being mindful of the breweries impact has always been at the forefront of our founder’s minds, Miranda adds one of Bates’ thoughts on the matter

Bates was really great in that he’d worked in lots of breweries, and he kind of just was like “I want this brewery to be sustainable, I want it to not be too impactful from a sort of environmental perspective, and I want it to perform really well for the brewers so that they don’t have to do just lots of physical and manual labour”.

…I guess being a farmhouse brewery and showcasing agriculture is a big thing for us. But also, it’s really important to us that we give back more than we take.

Opening the doors just 4 months before the pandemic, something that impacted everyone globally, was a big obstacle that had to be addressed head-on. Miranda illustrates how, as a team, they had to re-adapt very quickly, how were they going to get their new beer out to people now that the pubs are closed. Kegs were no longer as important, but getting beer into boxes and finding their new at-home online audience had to be quick. In the lockdowns they provided online brewery tours and drink-a-longs, to spread the word of what they were doing and to connect with beer lovers, albeit by the power of zoom. 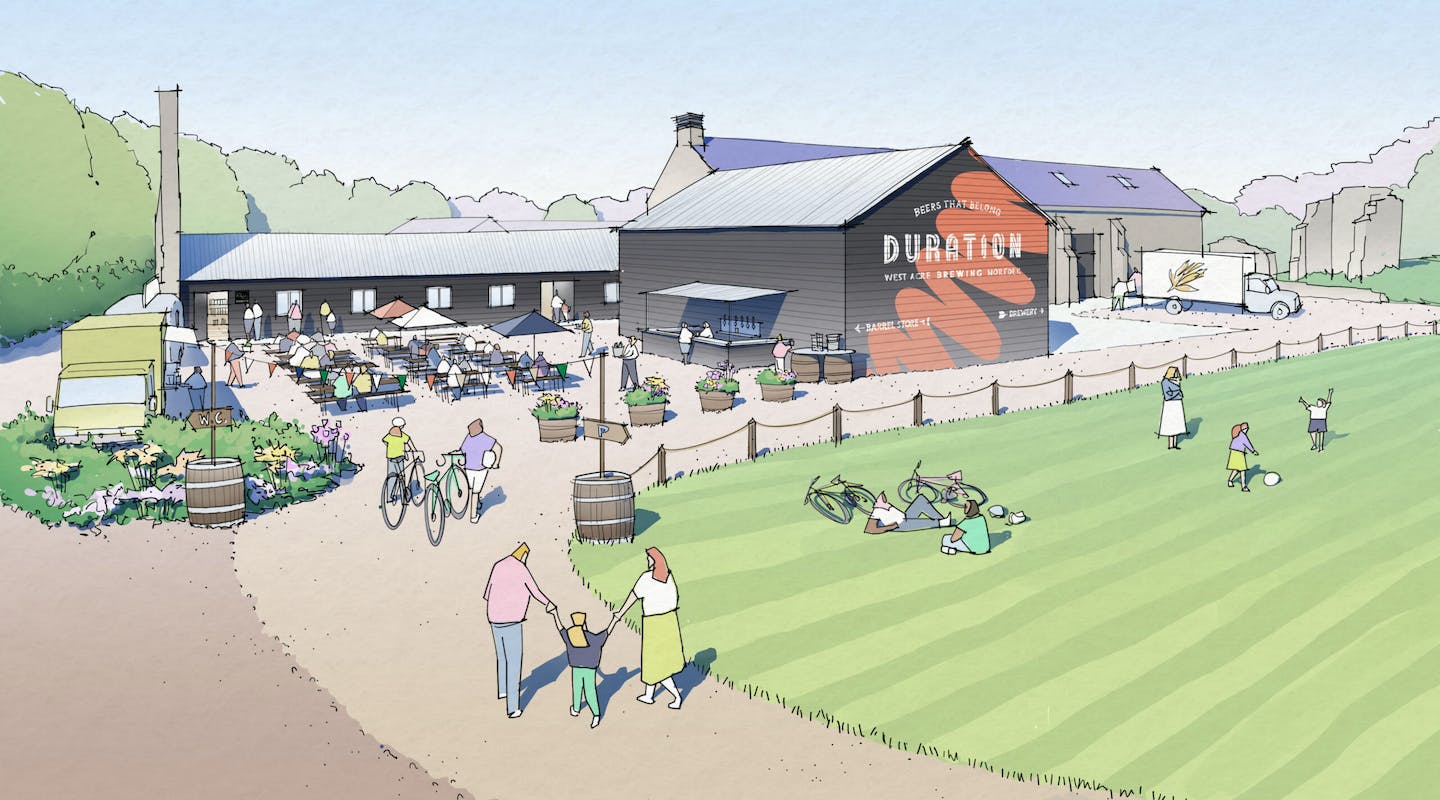 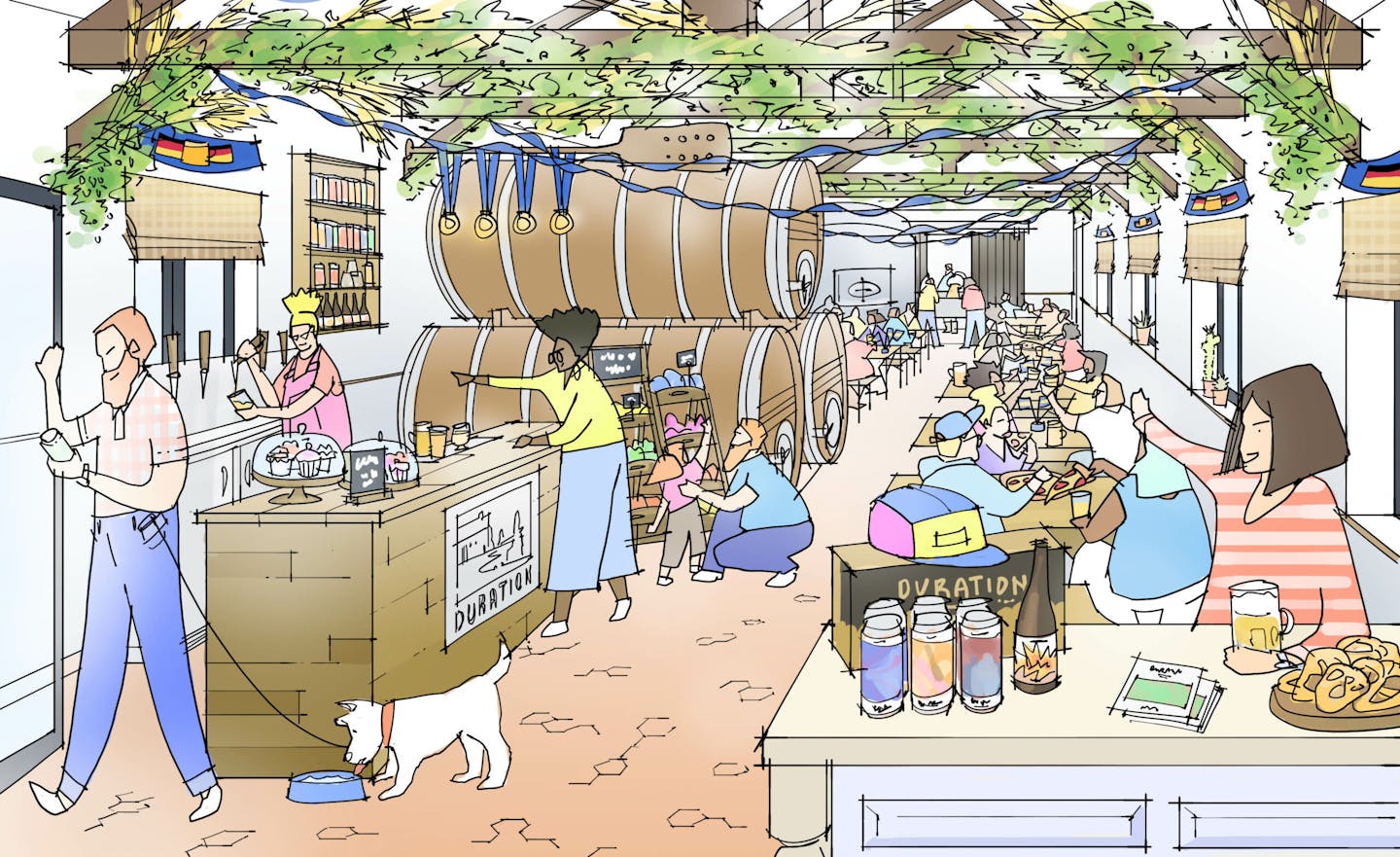 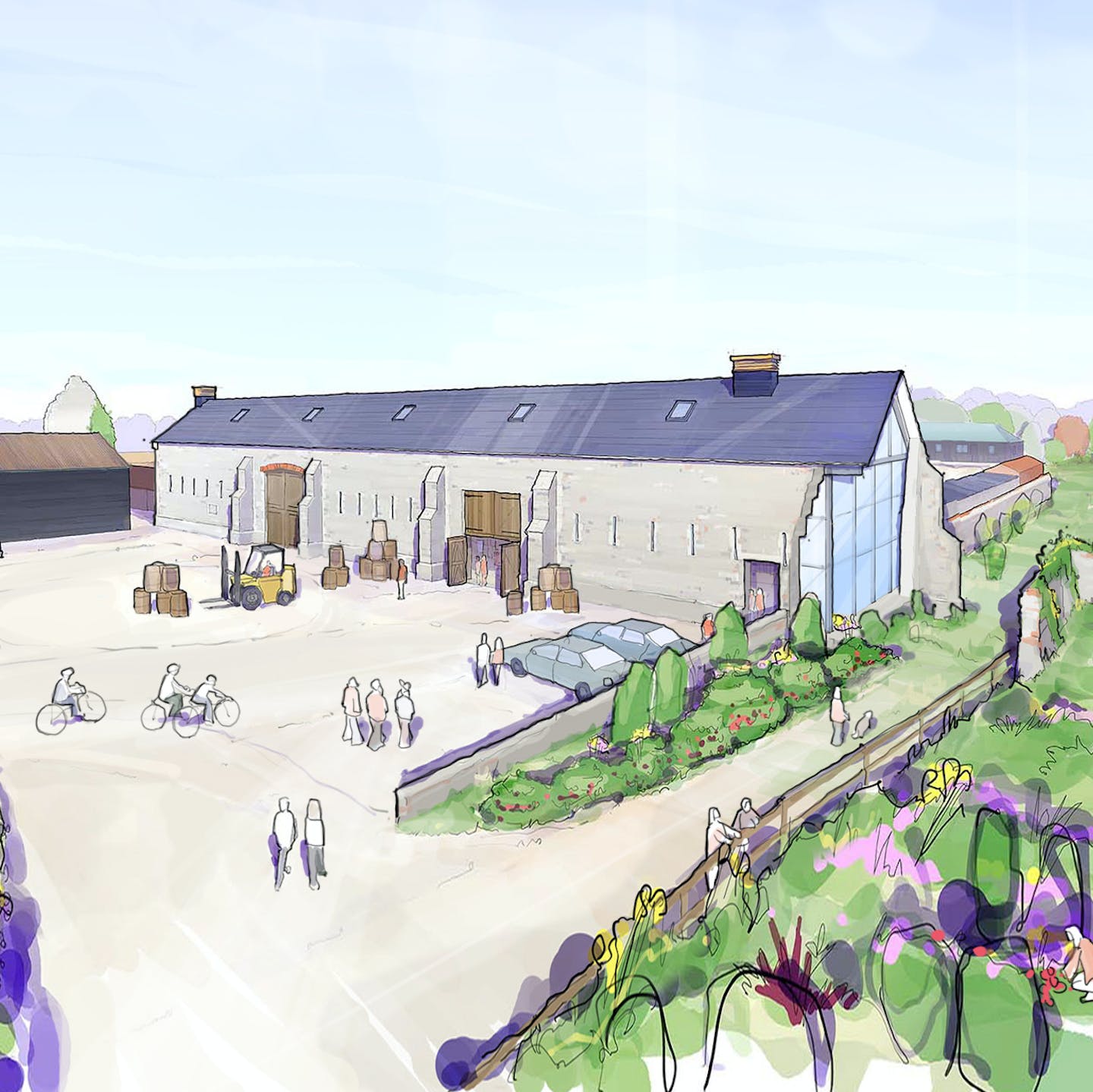 Throughout this, the brewery has continued to grow, as has the team. Figuring out how to work together as a team, whilst also respecting each other and their work-life balances

I want to build a culture. So for me, a company that, you know, plays together, works together, but also respects each other’s differences in you know, like, we’ve got a couple of members in our team that they like to finish and shut the door and not come back until Monday. Then we’ve got a couple that at the end of the shift, want to sit down together, have a beer, you know.  Socialise a bit together, and I want it to be all those things for each team member because everyone’s work life ratio is a different thing.

But Duration is not finished yet. Earlier this year, Miranda and Bates set out on a little road trip of the U.K. to launch their crowdfund campaign with the goal of building a taproom, utilising the last untouched part of the brewery, to upgrade their water treatment to lessen the chance of waste entering the nearby Nar Valley chalk river and other improvements.

Being in Norfolk, we could not make the beer as delicious as it is without adjusting our water. Norfolk is brilliant for growing, because the ground is really full of flynn and chalk, which creates a really nice filter, so it means that you have really rich beds of ground for know agriculture and growing stuff. But for beer it would only taste good for certain styles. I like the way we can cheat being in the rolling mountainous hills of Germany to make great pills.

Finally, miranda talk on the beer industry and how it can be very up and down, she’s over all found it to be a very welcoming space-  coming from a non-beer background but finding the confidence to say “I own a brewery”. Though there will always negative voice, Miranda’s ending words

We’re all figuring out how we get along with each other, how we grow and how we make space for everyone. 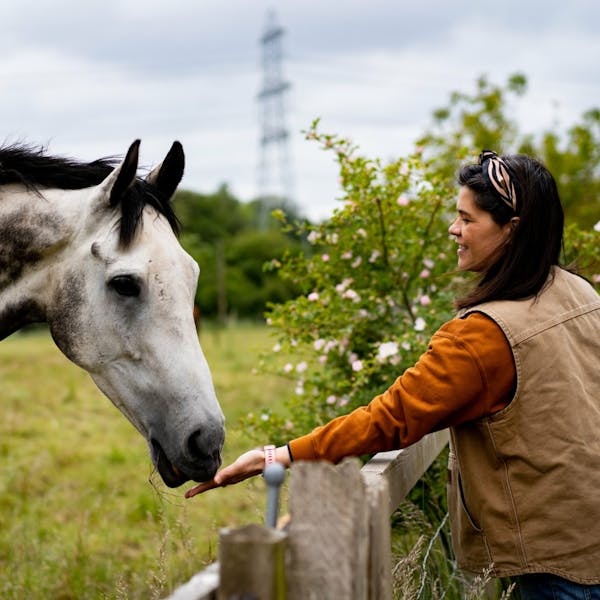